How Does the Queen Bully Get to be Queen?

Do you work with someone that gives you chills of dread when you know you’re working the same shift? Is she someone that if gone tomorrow you would feel like you won the lottery? Is this person the true leader on your unit although she is NOT the manager?
If so, you may be working with a QUEEN BULLY.
When I think of her, I think of the scene in the movie, The Lion King, when the hyenas were talking about Mufasa and would shutter at the mere mention of his name.
If you’re working with a Queen Bully, chances are, just the mere mention of her name makes you shutter too!
But how do these queens get to the throne?
It’s because when they were “queens in training”, their minor disruptive behaviors weren’t challenged. So, they escalated their destruction to the point where they develop a perceived power over others.
For example:
1stescalation – she calls someone stupid during shift report. Nobody else hears and her co-worker doesn’t say anything. She just ignores it.
The bully feels a surge of power. So she kicks it up a notch.
2ndescalation – now she calls someone stupid if FRONT of others. Nobody says anything.
The bully realizes that she can say almost anything and nobody will challenge her.
More power!
3rdescalation – she notices that people start to avert their eyes when she walks onto the unit. So, she starts bossing everyone around.
At this point, the bully knows she is queen among the villagers and decides to take the throne.
4thescalation – she starts to undermine the manager’s decisions to the point where she makes changes to various things, like the schedule, patient assignments, etc.
She is now untouchable.
Why? Because the manager, although is fully aware of her behaviors, doesn’t say anything about it either.
Now you have a Queen Bully.
HOW DO YOU TAKE THE QUEEN BULLY OFF OF HER THRONE?
The best strategy is to prevent the queens from becoming queens in the first place! The way you accomplish this is to address the 1st behavior that is inappropriate. If someone calls you “stupid” during report, stop immediately and say, “You just called me stupid (Name the behavior), and I find that offensive.”
By addressing the first unprofessional behavior, you are sending a clear message that bad behavior won’t be tolerated. This will prevent the bully from escalating behaviors to the point where she develops a perceived power gradient over others.
The KEY is that EVERYONE has to address inappropriate behaviors in the moment!
If you already have a queen, it’s not too late to start addressing her bullying ways, however, it is more difficult at this point – not impossible – but more difficult. In my recent post titled, “How to Catch a Professional Bully”, I detail the steps needed to deal with these queens.Click here to read.
Remember, nobody starts their nursing career as a queen bully. They earn their title by climbing the ladder of destruction – one bad behavior at a time. If we all stopped using silence as a strategy, perhaps we could dethrone some of the queens!
Thanks so much for reading.If you like this post, I recommend the following:
1.     Share with your colleagues and friends using the social share buttons.
2.     Subscribe to my blog (to the right of this post).
3.     Sign up to receive my latest updates and other goodies via my website. click here
Take care and stay connected!
Renee 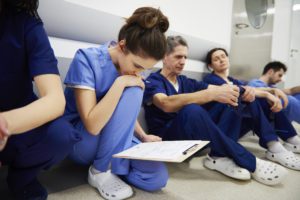 5 thoughts on “How Does the Queen Bully Get to be Queen?”